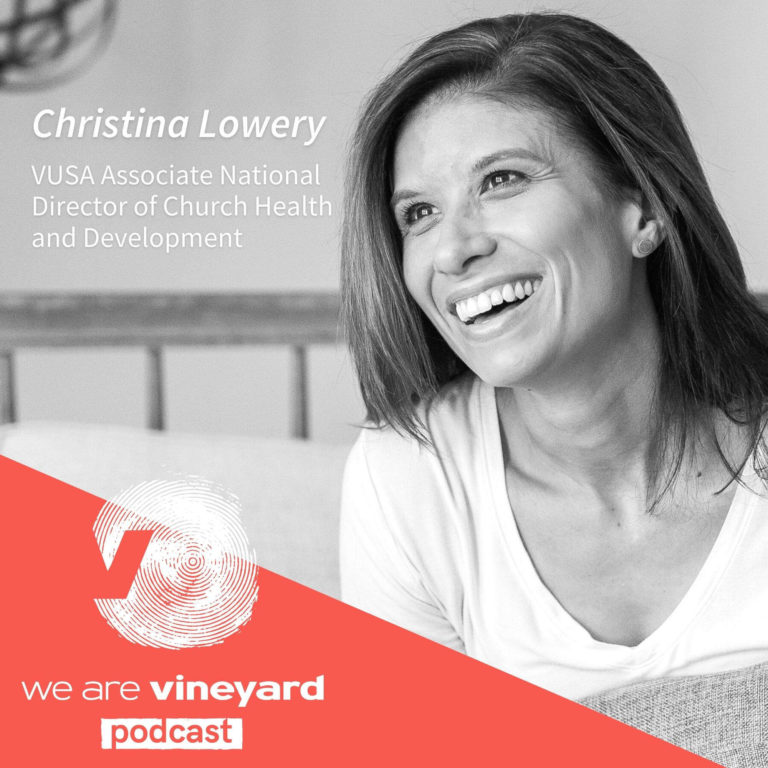 In this episode of We Are Vineyard, Christina Lowery shares her parents’ miraculous story of encountering the Lord for the first time, and her own story of growing up in the church, pursuing her own relationship with God and entering a life of ministry. Jay and Christina then dig deeper into the reality of the Lowery’s church planting experience, from the slow start to the sudden growth they were unprepared for, and the hardships they weathered that led to Christina stepping into the role of lead pastor. This is a powerful story of walking in obedience to the Lord that will encourage anyone who has been in ministry for a while.

Christina Lowery is the Associate National Director for Church Health and Development.  Early in her ministry career, Christina served as the Events Director for a large student internship at Teen Mania Ministries (Acquire the Fire) in Tyler, TX.  In 2001, she and her husband Joel joined a local Vineyard Church there, and served on the pastoral team for several years until they were called to move back to Virginia and plant Crossroads Church. Christina and Joel have co-pastored Crossroads Church in Fredericksburg, VA since 2008. As a Lead Pastor, Christina has been a big-picture thinker and creative visionary, responsible for communicating and driving the vision and mission of the church forward. She finds great joy in preaching and teaching, leadership development, and building systems that foster church health and growth.

In addition to her local leadership at Crossroads Church, she has served in other leadership roles with the Vineyard, such as an Area Leader in Northern and Central Virginia for ten years (2009-2019) and on the Vineyard Women in Leadership Team for the past three years (2018-2021).

Joel and Christina have been married for 23 years and have 3 amazing kids – Hannah (18), Caleb (15) and Zoe (8).  The Lowery family loves to travel and so far, their favorite destination is Maui, with its warm sun and beautiful island beaches. We Can Only Be Loved To The Extent That We’re Known with Santiago “Jimmy” Mellado Show Podcast Information Join Santiago “Jimmy” Mellado and Jay Pathak as they discuss growing up as “third culture kids”. Jimmy shares about the ever-present otherness he felt being raised in multiple countries and the way this impacted his sense of self, shaped his interests and desires, and the way God reclaimed every step of his life to shape a beautiful story of redemption and service to others. Jimmy Mellado is President and CEO of Compassion International. He has a deep love and passion for the beauty and potential of local churches fulfilling their Jesus-given mandate to redeem and restore this world for His name’s sake. Born in El Salvador and raised in seven different ... Tod Bolsinger: Tempered Resilience - How Leaders Are Formed in the Crucible of Change

In this episode of We Are Vineyard, Jay Pathak and Tod Bolsinger discuss adaptive change in the church. Tod speaks about how his passion for studying change and helping “faith leaders thrive as change leaders” developed, and the role of the pastor as a steady force in the midst of crisis and anxiety. Tod and Jay also talk about what we learned from the crucible of change that was the pandemic. Tod Bolsinger, MDiv, PhD, the co-owner and principal of AE Sloan Leadership, Inc, an executive coaching and consulting firm that works with church, non-profit, and marketplace leaders in leading change. He is also the Executive Director of the De Pree Center Church Leadership Institute, a Senior Fellow of the De Pree Center for Leadership, Associate Professor of Leadership Formation at Fuller Theological Seminary, was the founder of the Fuller Leadership Platform, and served as a Vice President of Fuller Seminary for six years. Prior to his educational career, he served as a pastor for 27 years.  He is the author of five books, including the Outreach Magazine Resource of the Year in pastoral leadership, Canoeing the Mountains: Christian Leadership in Uncharted Territory, Leadership for a Time of Pandemic: Practicing Resilience and most recently, Tempered Resilience: How Leaders are Formed in the Crucible of Change. Show Notes: Tempered Resilience by Tod Bolsinger Vineyard USA's recommended reading for February https://amzn.to/3LEdIV8 Canoeing the Mountains by Tod Bolsinger https://amzn.to/3oT6fb7 Reach us at: VineyardUSA.org Facebook, Instagram and Twitter: @VineyardUSA ... Steve Nicholson: It's Not What We Do, It's What's Been Done To Us

In this episode of We Are Vineyard, Steve Nicholson shares about the process of deciding for himself to follow the Lord, his early evangelism experiences, and the Holy Spirit encounter that changed it all! He and Jay also talk about what Steve sees happening in the church today amongst different generations. Steve Nicholson began ministering as a college student through InterVarsity Christian Fellowship in the early 1970s. After graduation, he moved to the Chicago area where he and several other twenty-something leaders founded a church. That fellowship, begun in 1976 in Evanston, Illinois, placed a high priority on contemporary worship, biblical teaching, openness to the Holy Spirit, and committed relationships as a church family. In 1981, Steve and a team from the fellowship established a new church in Humboldt Park, a neighborhood in Chicago’s inner city. Both churches joined Vineyard USA in August of 1985, and Steve transferred leadership of the Humboldt Park Vineyard to one of his team members in 1986. The Evanston Vineyard has since planted nine other congregations in the Chicago area, and another fifteen in other cities or countries. Steve led Vineyard USA’s church planting task force for over twenty years. Steve has ministered to and trained church leaders in India, Australia, New Zealand, Kenya, Uganda, South Africa, Turkey, Lebanon, Brazil, Chile and several Central Asian countries as well as in the United Kingdom and Ireland. The Evanston Vineyard is a diverse congregation from over 50 nations of the world with no majority racial or cultural group. Since 1986 the ministry of the Holy Spirit has been a regular and ongoing strength and emphasis of the Evanston Vineyard. Steve and his wife, Cindy, live in Chicago. They have three ...