Steve Nicholson: It's Not What We Do, It's What's Been Done To Us We Are Vineyard
Steve Nicholson: It's Not What We Do, It's What's Been Done To Us

In this episode of We Are Vineyard, Steve Nicholson shares about the process of deciding for himself to follow the Lord, his early evangelism experiences, and the Holy Spirit encounter that changed it all! He and Jay also talk about what Steve sees happening in the church today amongst different generations. Steve Nicholson began ministering as a college student through InterVarsity Christian Fellowship in the early 1970s. After graduation, he moved to the Chicago area where he and several other twenty-something leaders founded a church. That fellowship, begun in 1976 in Evanston, Illinois, placed a high priority on contemporary worship, biblical teaching, openness to the Holy Spirit, and committed relationships as a church family. In 1981, Steve and a team from the fellowship established a new church in Humboldt Park, a neighborhood in Chicago’s inner city. Both churches joined Vineyard USA in August of 1985, and Steve transferred leadership of the Humboldt Park Vineyard to one of his team members in 1986. The Evanston Vineyard has since planted nine other congregations in the Chicago area, and another fifteen in other cities or countries. Steve led Vineyard USA’s church planting task force for over twenty years. Steve has ministered to and trained church leaders in India, Australia, New Zealand, Kenya, Uganda, South Africa, Turkey, Lebanon, Brazil, Chile and several Central Asian countries as well as in the United Kingdom and Ireland. The Evanston Vineyard is a diverse congregation from over 50 nations of the world with no majority racial or cultural group. Since 1986 the ministry of the Holy Spirit has been a regular and ongoing strength and emphasis of the Evanston Vineyard. Steve and his wife, Cindy, live in Chicago. They have three adult children and eight grandchildren. Show Notes: Power Evangelism by John Wimber and Kevin Springer Vineyard USA’s recommended reading for June https://amzn.to/3PK64e2 Socials: Vineyardusa.org @vineyardusa
Previous Episode
Next Episode 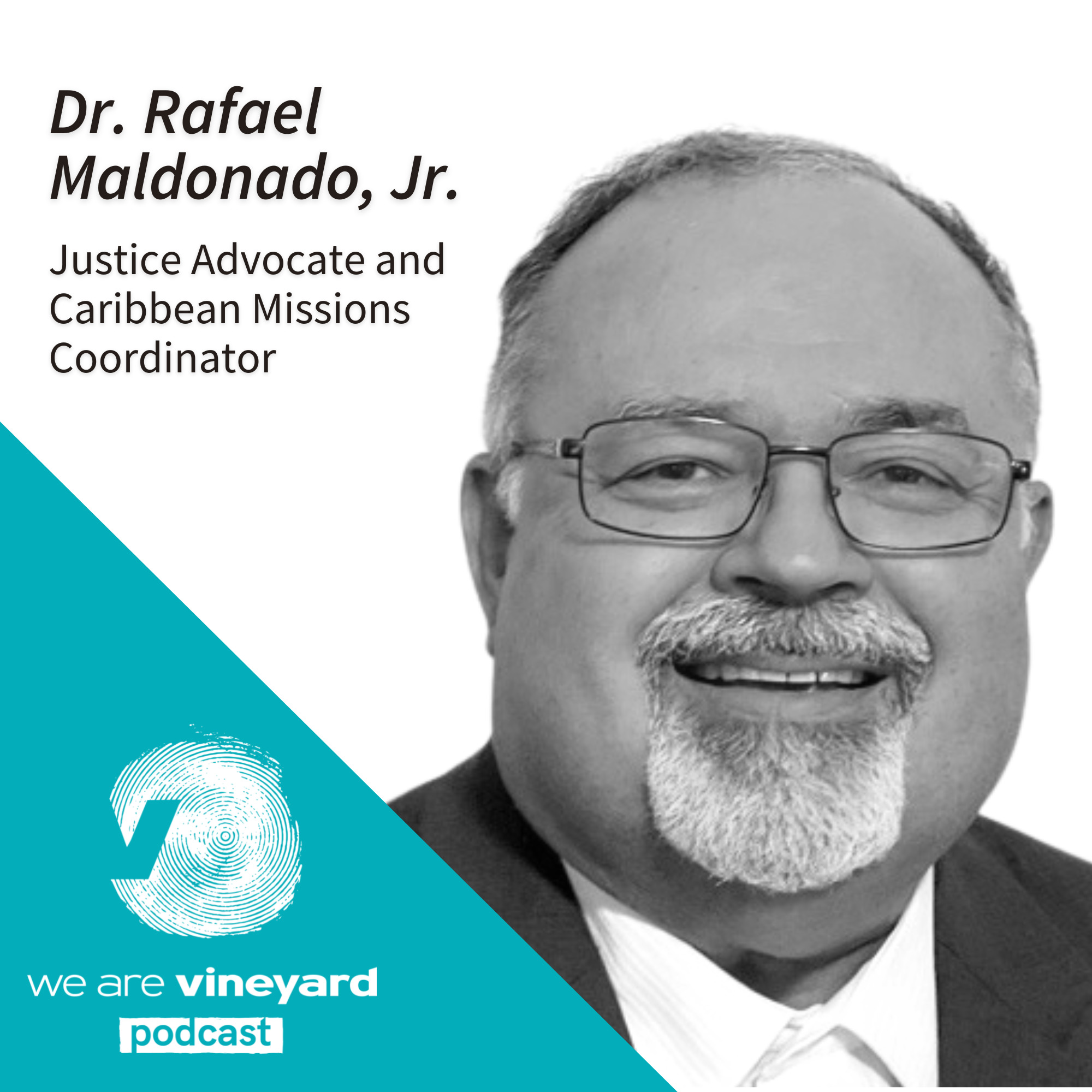 Ray Maldonado: Embracing A Kingdom AND A Missional View Of Diversity

In this episode of We Are Vineyard, Jay talks with Ray Maldonado about the decades of work he’s invested in advocating for diversity and developing multicultural churches. Ray shares the story of how the Lord reclaimed his marriage, the scripture that turned his heart toward the fringes of his community, his call to ministry, and how he came to study diversity in the Vineyard Movement as a doctoral student. Ray and Jay discuss what they have been gleaning from the Evangelical Covenant Church and the challenges and opportunities a Euro-American, English-dominant church may encounter in moving toward multiculturalism. Dr. Rafael Maldonado Jr., or “Ray” as he is known to his friends, pastored in Chicago for 29 years in two churches. He is the head Caribbean Missions Coordinator for the Vineyard Movement, and also leads a Partnership for an island in the Caribbean. Besides developing a church planting program, Ray is a Certified Coach and coaches church planters and leaders in the U.S. and Latin America. He and his wife Teresa have five children and eleven grandchildren, live in Lakeland, Florida and are involved in the Lakeland Vineyard. Ray’s heart is to promote the heart of Jesus for the Biblically diverse church that he calls the Transcultural Church. He received his doctoral degree from Bakke Graduate University. Show Notes: Vineyard USA suggested reading for September Prophetic Lament by Soong-Chan Rah https://vineyardusa.org/podcast/ Evangelical Covenant Church- Sankofa https://covchurch.org/mercy-justice/sankofa/ Socials Socials: Vineyardusa.org @vineyardusa ... 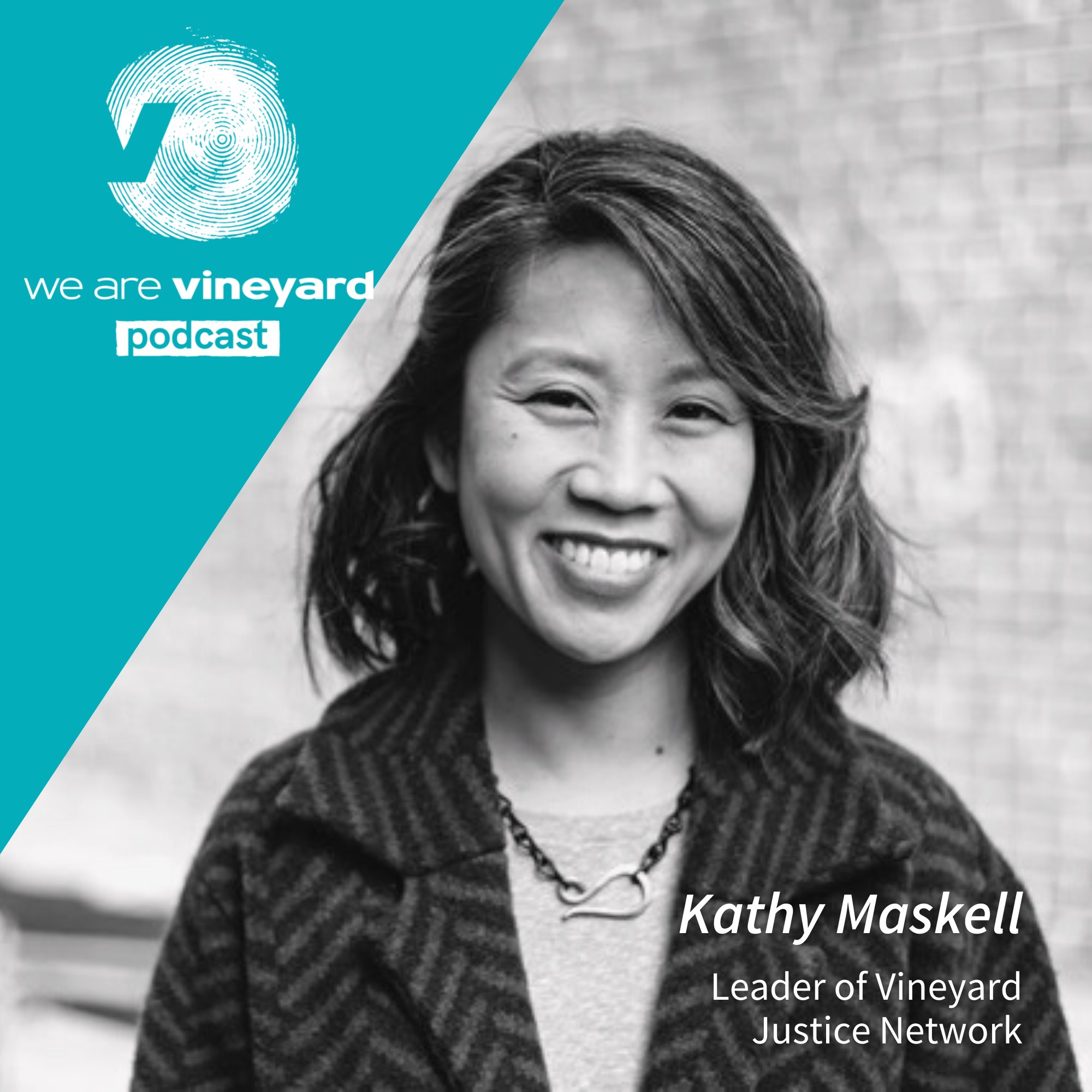 In this episode of We Are Vineyard, Kathy Maskell shares her story of being raised by immigrant parents, and the twists and turns of her spiritual journey during her childhood and young adults years. She and Jay talk about different experiences of justice woven throughout her life, her eventual work with anti-human trafficking organizations, and what she’s learned about God’s heart for the poor. Kathy Maskell is the lead pastor at East Denver Vineyard. She joined the MHV staff in 2020 in the midst of a global pandemic. She also leads the Vineyard Justice Network and served on the Executive Board for Vineyard USA. Her heart for justice is shaped by her previous advocacy work with Love146 (an organization committed to ending child sex-trafficking), studying abolitionist movements, and creating intentional spaces for deep conversation and meaningful action for biblical justice. Kathy was raised by Buddhist parents and came to faith while earning a degree in English from the University of Chicago and went on to get an M.S. Ed from City College (CUNY), and an M.Div. in systematic theology at Union Theological Seminary (NYC). She and her husband, Caleb, co-planted the Elm City Vineyard and have two children, Josiah and Emmanuelle. Some of her favorite things to do right now are exploring her new city for awesome museums and the tastiest breakfast places for dates. Show Notes: Sign up for a regional gathering near you! https://vineyardusa.org/events/ Jars of Clay- Flood (Lift Me Up) https://bit.ly/3c9mn4X Love 146 https://love146.org Rich Christians in an Age of Hunger by Ronald J. Snider https://amzn.to/3nYXKKI East Denver Vineyard https://www.eastdenvervineyard.org/ Vineyard Justice Network https://vineyardjusticenetwork.org The Gospel With the Poor: VJN's First Publication https://bit.ly/3c8RmOh Socials: Vineyardusa.org @vineyardusa FB for Kathy: Facebook.com/kathymaskell IG for East Denver Vineyard: @eastdenvervineyard IG for Vineyard Justice Network: @vineyardjustice ...