We Are Vineyard
Andy Crouch: Strong and Weak - Embracing a Life of Love, Risk and True Flourishing 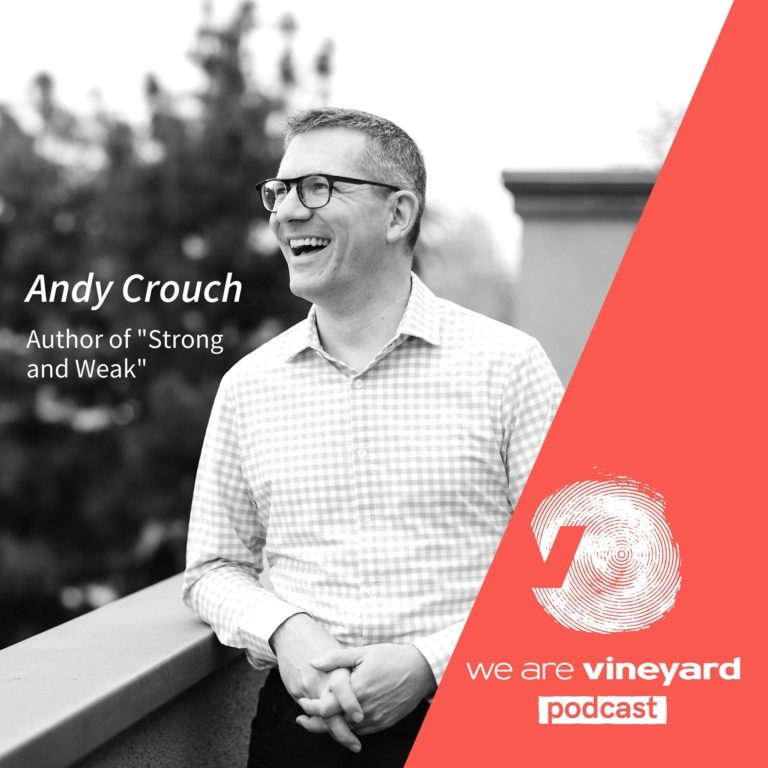 Strong and Weak: Embracing a Life of Love, Risk and True Flourishing with Andy Crouch

In this episode of We Are Vineyard, Andy Crouch shares about finding God inside religious practices and differentiating from the faith of his parents, and how studying Greek may or may not have added to his understanding of the Bible. Jay and Andy also discuss the transformative and purifying process of writing, as well as some key concepts outlined in Andy’s book “Strong and Weak”, which is Vineyard USA’s featured resource! This is an enriching episode full of deep encouragement and invitation to flourishing.

Andy Crouch is partner for theology and culture at Praxis, an organization that works as a creative engine for redemptive entrepreneurship. His two most recent books—2017’s The Tech-Wise Family: Everyday Steps for Putting Technology in Its Proper Place and 2016’s Strong and Weak: Embracing a Life of Love, Risk and True Flourishing—build on the vision of faith, culture, and the image of God laid out in his previous books Playing God: Redeeming the Gift of Power and Culture Making: Recovering Our Creative Calling.

Andy serves on the governing boards of Fuller Theological Seminary, the Council for Christian Colleges and Universities, and InterVarsity Christian Fellowship. He also serves as an advisor to The Repentance Project, The Pelican Project, and Revoice. For more than ten years he was an editor and producer at Christianity Today, including serving as executive editor from 2012 to 2016. He served the John Templeton Foundation in 2017 as senior strategist for communication. His work and writing have been featured in The New York Times, The Wall Street Journal, Time, and several editions of Best Christian Writing and Best Spiritual Writing—and, most importantly, received a shout-out in Lecrae’s 2014 single “Non-Fiction.”

A Long Obedience in the Same Direction by Eugene Peterson
https://amzn.to/3tBoYLp Reverend Paul Robinson: Living At The Intersection Of Difference

In this episode of We Are Vineyard, Reverend Paul Robinson shares about how the Lord has orchestrated his life since childhood, from a prophetic word given by his Sunday school teacher and his experiences in different denominations, to growing up on the south side of Chicago and his time in seminary. Reverend Robinson talks about learning from different streams of theology and thought, and how all the pieces of his life started to fit together vocationally in a very beautiful way. He and Jay also talk about being uniquely positioned to pastor through difficult times, leading constructive dialogues, and the value in listening to a diverse set of voices. Paul Robinson is the Executive Minister of Love Mercy Do Justice for the Evangelical Covenant Church. The mission of LMDJ is to join God in making things right in a broken world. Prior to this role Paul was Senior Community Leadership Manager with the Wilder Center for Communities, former Director of the organization’s James P. Shannon Leadership Institute and Church Planter. Paul has partnered with nonprofit, for-profit, education, government and community individuals and organizations in core value clarification, leadership development, intercultural agility, anti-racism and capacity strengthening to help them better lead themselves and others. Paul is most comfortable at the intersection of ideas, difference, passion and effective action. He enjoys using his skills in meeting design, facilitation and convening to catalyze meaningful connections to stimulate individual and community transformation. Robinson holds a B.S. degree in Finance from Eastern Illinois University and a Master of Divinity degree from McCormick Theological Seminary. Paul Robinson is 2017 AARP Minnesota and Pollen Fifty over Fifty honoree. ... Dennis Liu: Breaking The Cycle Of The Silent Exodus

In this episode of We Are Vineyard, Jay sits down with Dennis Liu to talk about his recent transition to lead pastor of Vineyard of Hope church, and some of the conversations and considerations unique to a leadership transition in an immigrant church. Dennis shares about the “silent exodus” of young people from immigrant churches, some of the cultural blessings and challenges, and some of his dreams for the Asian American church, particularly relating to worship. Dennis Liu is the leader of the Asian American Association for Vineyard USA and the lead pastor of Vineyard of Hope church in Walnut, CA (formerly known as Vineyard of Harvest). Having grown up in a Christian family in NJ, he feels extremely blessed with a rich Christian heritage. It was during his high school years that he began to sense that the Lord was calling him into full-time ministry. At the time, he ignored the call out of selfishness simply because he wanted to make a lot of money and become successful in the world’s eyes. Subsequently, he enrolled at Cornell University in the fall of 1996 with the intention of going on to medical school upon graduation. The Lord continued to work on his heart through his college years, and the calling of full-time ministry didn’t decrease but grew stronger. After college, the door opened up for him to come out to CA to minister after he graduated from college and to begin attending Fuller Theological Seminary. In May 2000, he headed out to CA and began to intern at Vineyard of Hope Church while pursuing a Master of Arts in Intercultural Studies at Fuller. Over time, the ministry ... 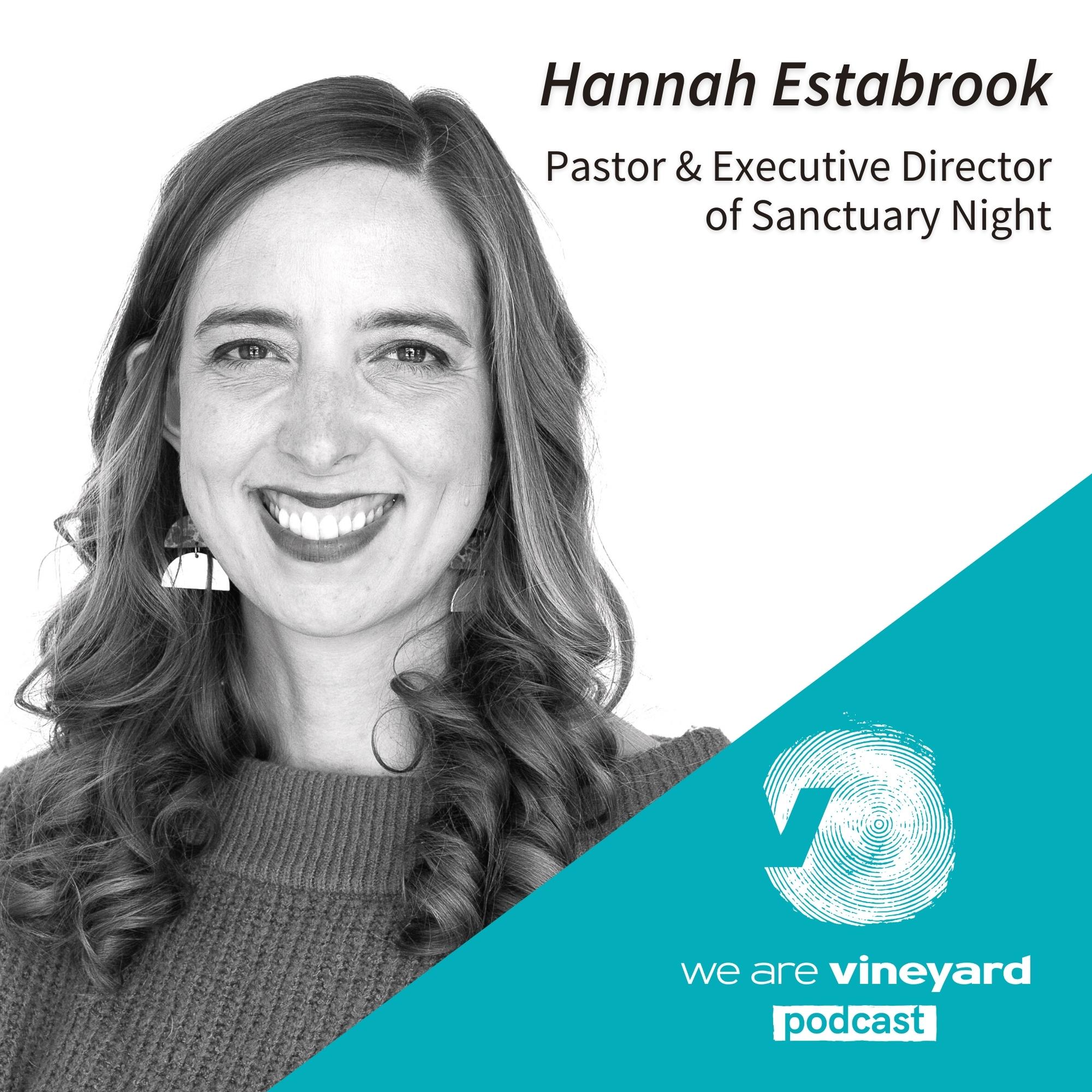 In this episode of We Are Vineyard, Jay talks with Hannah Estabrook about her work as a mental health clinician working with survivors of sex trafficking. Hannah shares about her early experiences with the Holy Spirit, how she was drawn to the mental health field and how continuing to follow the next right step led her to establish a drop-in center for women involved in sex work. She also shares her personal practices that have prevented her from burning out, her goals in working alongside survivors, and the most surprising thing the Lord is doing in her heart right now. Hannah Estabrook, MA, LPCC-S has been working as a clinician in the mental health field for over seventeen years and has specialized in providing direct services to survivors of sex trafficking. Her work with survivors has included the settings of the criminal justice system (CATCH Court), as well as the streets (Sanctuary Night), where she currently serves as Executive Director. She also serves as a pastor of The Abbey, a contemplative Vineyard church in the city of Columbus, Ohio. Show Notes: https://vineyardusa.org/associations/ Vineyard USA suggested reading for August https://vineyardusa.org/gospel-with-the-poor/ Sojourners: Should Prostitution Be Decriminalized? https://sojo.net/magazine/may-2022/should-prostitution-be-decriminalized The Abbey https://theabbeycolumbus.church Sanctuary Night https://www.sanctuarynight.com/ Socials Socials: Vineyardusa.org @vineyardusa Instagrams: @hannahruthestabrook @theabbeycolumbus @porchlightcolumbus @sanctuary_night ...